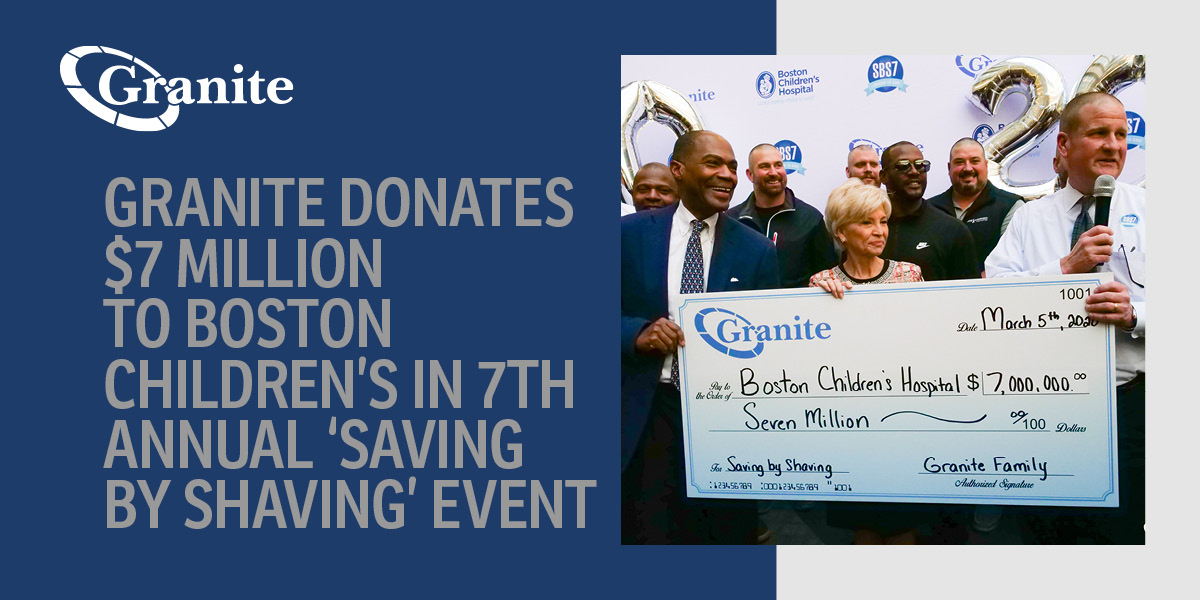 Saving by Shaving proceeds support Boston Children’s mission of unmatched care and world-changing science and commitment to healing children, helping families, and fueling lifesaving research for every child, putting kids from around the world on the path to a healthier, more promising future.

“Today, I’m especially proud to be part of the Granite team,” said Hale. “In addition to the generous support of our sports heroes and community leaders, 1,400 of our teammates volunteered to sacrifice their hair for a couple of months and, in many instances a year, for some of the young ladies,” said Hale. “They did it because they want to help children in Boston and around the world.”

“This is an incredible opportunity for everyone to come out on behalf of the children and Boston Children’s Hospital,” said Sandi Fenwick, CEO of Boston Children’s Hospital. “It’s truly an inspiring day to see so many people willing to do this. Personally and professionally, it’s amazing. Thank you to Rob and Karen and the Hale family, but also to the whole Granite team. You are really unbelievable friends of the hospital and, more importantly, for children broadly.”

In the past seven years, more than 9,000 people have participated in the “Saving by Shaving” event by shaving their heads and donating their hair, raising more than $35 million for charitable organizations.

For each person who shaved their head or donated at least 8 inches of their hair, Granite donated $2,500, which was matched dollar for dollar by the Hale family, for a total of $5,000 per head to pediatric research and treatments or The Every Child Fund at Boston Children’s Hospital.

Additionally, all locks of hair will be donated to Hair We Share, which creates custom wigs free of charge for those affected by medical hair loss.

Plus, a donation of $100 was made for every "chemo cap" (a hat for cancer patients who’ve lost hair due to chemotherapy) created by the Granite Fiber Art's team. This year the team handcrafted 234 hats for children and adults.

The “Saving by Shaving” event also was supported by Granite’s business customers and local businesses, such as:

·         Dunkin Donuts, which provided coffee and breakfast for the volunteers and barbers/stylists.

·         Professional barbers and stylists, who donated their time and expertise.

The “Saving by Shaving” event was closed to the general public, but Granite encourages likeminded individuals to support funding for pediatric cancer research by donating to the Boston Children’s Hospital Trust. Click Here

Granite’s annual “Saving by Shaving” fundraiser began seven years ago when CEO Rob Hale jokingly dared a member of his team to shave his ZZ Top-style beard in exchange for a $1,000 donation to a cancer hospital. Over the next two weeks, hundreds more Granite teammates reached out to Hale asking for the same opportunity to raise funds and shave their heads or beards in solidarity with those undergoing chemotherapy. From there, 428 teammates turned out at Granite’s first “Saving by Shaving” event and raised more than $2.2 million to benefit cancer research.

In addition, the “Saving by Shaving” event is supported by Granite’s business customers and local businesses, including professional barbers and stylists who will donate their time and expertise.

Photos and videos are available to press on request. Contact Khali Henderson

Granite delivers one-stop communications solutions to multilocation businesses and government agencies throughout the United States and Canada. The $1.5 billion company serves more than two-thirds of the Fortune 100 companies in the United States, and has 1.75 million voice and data lines under management. Granite launched in 2002 and grew quickly by helping businesses to simplify sourcing and management of local and long distance phone services with one point of contact and one invoice for all their office locations nationwide. Today, Granite is the leader in aggregating Plain Old Telephone Services (POTS), and has extended its unique value proposition – “one company, one contact, one bill” – to include a range of advance business communications services, including Internet access, SD-WAN, wireless WAN, hosted PBX, SIP trunking, mobile voice and data, mobile device management, managed security, network integration and much more. Granite employs more than 2,300 people at its headquarters in Quincy, Mass., and nine regional offices nationwide. For more information, visit www.granitenet.com.

Boston Children's Hospital, the primary pediatric teaching affiliate of Harvard Medical School, is home to the world's largest research enterprise based at a pediatric medical center. Its discoveries have benefited both children and adults since 1869. Today, more than 3,000 scientists, including 8 members of the National Academy of Sciences, 17 members of the National Academy of Medicine and 12 Howard Hughes Medical Investigators comprise Boston Children's research community. Founded as a 20-bed hospital for children, Boston Children's is now a 415-bed comprehensive center for pediatric and adolescent health care.

Hair We Share was formed in 2014 and is supported by over 40 years of experience in custom design for wigs and hair pieces. We are extremely proud to say that Hair We Share is rapidly making a mark in the medical related hair loss communities, improving lives and restoring the confidence of men, women and children throughout the USA. For more information, visit https://hairweshare.org/ 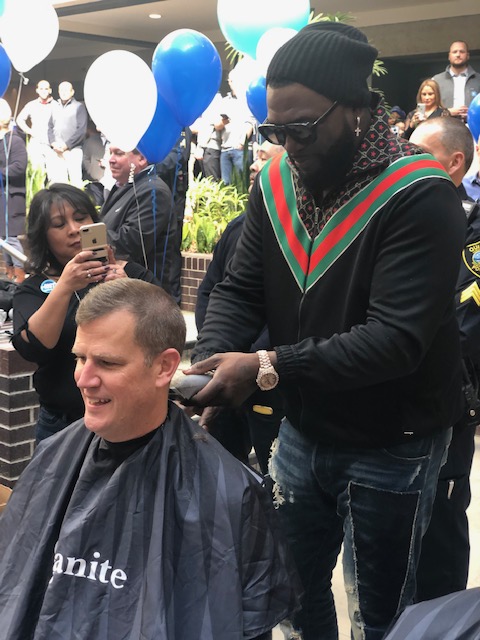 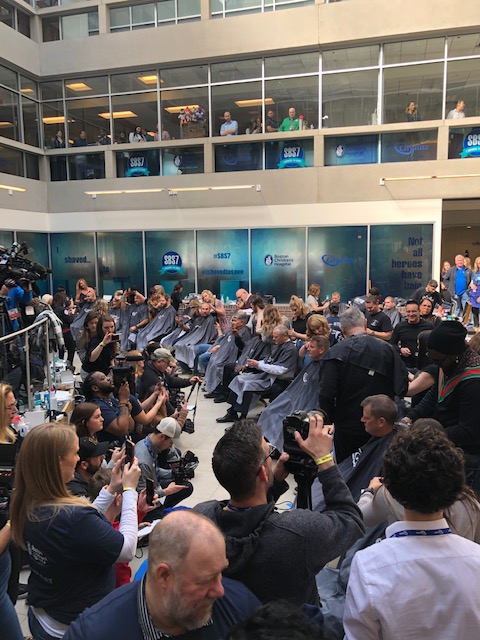